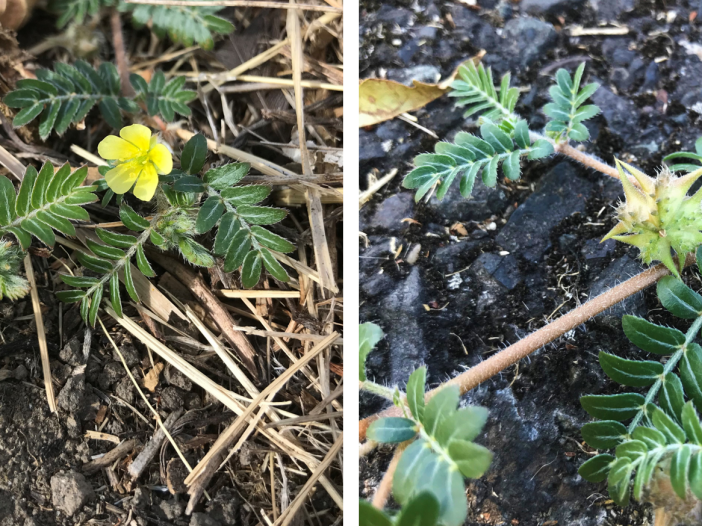 Many of life’s lessons teach us that the inconspicuous things are those that you need to keep an eye out for. In more arid regions there is a plant that everyone knows because they have probably stepped on it or had a tire popped by it : puncturevine. Now, this troublesome pest has been popping up in our area. If we don’t act quickly, puncturevine will become increasingly common and start sprouting along our sidewalks or yards.

Weeds are often described as pesky, but a better word for this one is NASTY. Puncturevine (Tribulus terrestris) is an annual herb that grows as a groundcover with small, opposite, compound A leaf consisting of several distinct leaflets joined to a single stem. leaflets that are covered in tiny hairs. New sprouts begin to emerge soon after the first spring rains, with flowers quickly developing within two to five weeks. Its flowers are bright to pale yellow and have five petals that close during the evening. Once mature, it grows burrs that comprise of four to five seed pods that have two large sharp spines each. The burrs hide close to the ground out of sight until you ride over them or decide to skip putting on your shoes to grab the mail.

Why Should We Control Puncturevine?

To make matters worse, puncturevine is toxic to livestock, particularly sheep and cattle. When livestock consume it in large amounts, they can succumb to nitrate poisoning that can cause blindness, paralysis, and even death. Puncturevine’s sharp burrs injure livestock’s hooves, skin, and mouths when they graze in infested areas, causing serious injuries. Pets also get the burrs caught in their paws, causing distress or injury. Unfortunately, puncturevine tends to invade agricultural lands such as orchards or hay fields, contaminating agricultural products with its spiny burrs.

What Should I Do If I Find Puncturevine?

Puncturevine is well-established in Eastern Oregon. It has been documented west of the Cascades, including in the Portland metro and adjacent areas. However, it is not as widespread in our region as other spiny invasive species such as blackberry or English holly. There is still a chance to keep this weed from claiming bicycle or ATV tires throughout the Tualatin River watershed. We are asking anyone who spots puncturevine to please report it to the Oregon Invasive Species Hotline with a photo and location of the infestation. Once we have confirmed the identification, a trained weed expert can come out to control the puncturevine for free.

Your observations could help keep this painful nuisance from overrunning our farms, natural areas, and parks – or from ruining your day with a popped ATV or bike tire!