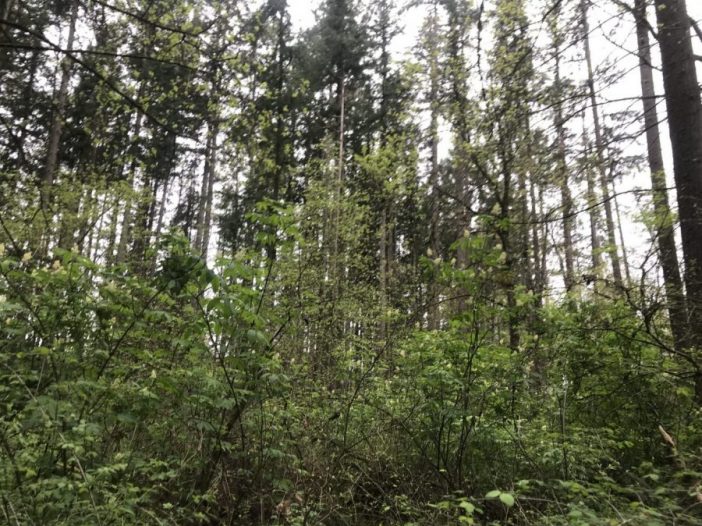 Dead trees facilitate the growth of an understory by increasing sunlight and space.

Similar to bacteria and certain critters (like worms, snails, beetles, and termites), fungi facilitate nutrient cycling through decomposition. Fungi break down dead and dying tissue into nutrients, including proteins and minerals. These nutrients then support living, growing plants and animals. Decomposition is a slow process that can take many years, but even trees that haven’t completely returned to the soil provide important benefits. Standing dead trees are important habitat for cavity-nesting birds and mammals, and wildlife that forage on insects. When a tree loses its leaves and branches, it creates a gap in the forest that can spark a series of forest activity. More space and more sunlight allows other species of trees and shrubs to grow – increasing overall forest diversity.

There are several types of fungi-caused root disease. Laminated root rot is one of the predominant root diseases in Western Oregon.

While hardwoods are immune to the pathogen, Phellinus weirii can be detrimental to stands of Douglas fir, grand fir, white fir, and mountain hemlock. Root rot hinders trees’ ability to take up water and essential nutrients. Once affected, trees are more susceptible to other health problems, like bark beetles. Trees of all sizes and ages can be infected by laminated root rot, but because early mortality is scattered among young, small trees, the disease usually isn’t obvious until the stand reaches maturity. Once symptoms are visible, the infection has already spread considerably, making it difficult to bring under control. For these reasons, forest owners must be vigilant against this inconspicuous tree disease.

Most infections begin when the roots of young stands come in contact with the fungus that is living in decaying wood from past generations of trees. The rate of spread through a stand can be quite rapid, averaging about 34 cm per year (over 2 feet), but symptoms in the forest crown may not be noticeable until 50% or more of the root system has been destroyed.

Because the disease spreads from infected stumps to the roots of healthy seedlings or trees, the key to managing laminated root rot is to catch it early and isolate the fungal network underground. Excavating infected stumps and roots can help ensure new generations of trees don’t become infected. But this method can be expensive, and fungi can linger in the soil on broken roots. A better way to manage this disease is to remove all visibly infected trees in the disease pocket, remove a 50- to 100-foot buffer of healthy trees around the pocket, and interplant disease-tolerant or immune tree species. This approach won’t remove Phellinus weirii from the site, but it will reduce the effects of the disease upon the stand as the fungi cannot spread as effectively on roots of resistant or tolerant tree species. Hardwoods like big leaf maple, Oregon white oak, and Oregon ash are immune to the disease, while Western red cedar and ponderosa pine are resistant.

To learn more about laminated root rot and prevention, check out these resources: