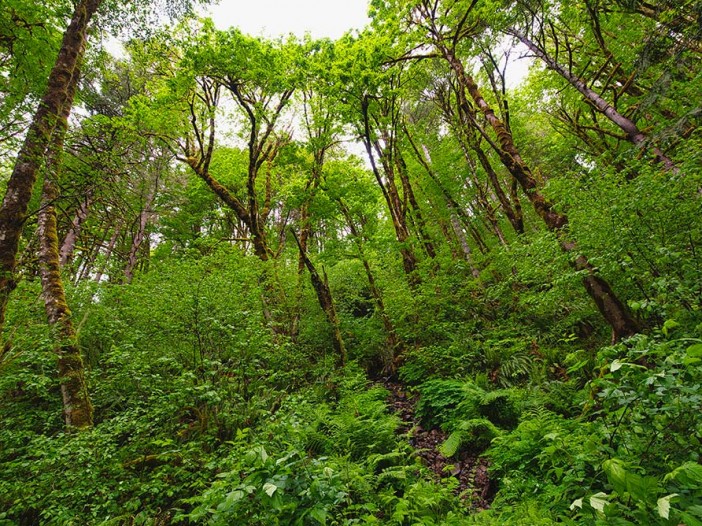 Over 50% of the land in Washington County is lush forest. Photo by TSWCD staff.

It should come as no surprise to Oregonians that our state is blessed with large swaths of forest – according to the Oregon Forest Resources Institute, forests cover nearly half of the state (47%)! But not all forests are created equal. In fact, Oregon forests can be classified into twelve distinct types – each type specially adapted to a unique climate. The five most common forest types include hemlock/spruce, Douglas fir, mixed conifer, subalpine, and ponderosa pine. So, what types of forest thrives here in Washington County? Let’s find out!

Washington County has grown and diversified significantly within the past several decades, yet over half of the county remains forested, most of which is privately owned by individuals and commercial industry.

A 2003 survey by the Oregon Small Woodlands Association found that the leading reason county residents chose to own forest was their appreciation for a rural lifestyle and the desire to live in the aesthetically pleasing forest. The love for natural scenery as a primary motive for owning woodland sets Washington County residents apart from the rest of Oregon and the nation. While the countryside lifestyle and scenery are important to landowners in other places, it was of much less importance [1]. Of the nearly 300,000 forested acres in Washington County that aren’t privately owned, about 20% is state forest, 5% is federally managed, and just over 1% is held by local municipalities such as cities and counties.

Long before human communities divvied up the forests for particular purposes, the forests were shaped by dramatic natural forces.

The Willamette Valley’s eventful natural history has a big influence on the region’s climate and soil type, both of which affect forest composition. Near the end of the last ice age, the valley was periodically flooded by the advance and retreat of glaciers residing in what is present-day Montana. The floodwaters deposited fine clays and silts, which stuck around after the floods eventually drained into the Pacific Ocean. These lowland sediments were the very beginning of our beloved forests.

Hardwood trees typically fare better in poorly drained soils, which is why you’ll tend to see more hardwood species than conifers in the valley bottom. The black cottonwood is particularly happy here, as evidenced by its pioneering status – it’s so well adapted to flood-prone areas that it’s among the very first species to reappear on the landscape after a disturbance. The shiny undersides of its spear-shaped leaves make it easily identifiable while also serving as an important food source for forest-dwelling herbivores. The big leaf maple is also likely to be seen among Washington County’s hardwoods. As its name suggests, the big leaf maple has the biggest leaves of all the species of maple. While it does produce sap that can be turned into maple syrup (yum!), its wood is its most profitable commodity, making up about 18% of the total hardwood volume in the Pacific Northwest.

As you travel west toward the Coast Range, the soils change with increasing elevation. Sediments in the foothills generally include coarser, better drained soils – soils that conifers love. It feels wrong to discuss Oregon’s evergreens without mentioning the beloved Douglas fir. This tree of 1,000 uses is popular for industry due to its strength and large size. While many already know this is Oregon’s state tree, it may come as a surprise to learn it is not a true fir. For decades, botanists struggled to correctly classify the Douglas fir and, in 1867, it was given its very own genus – Pseudotsuga – which means false hemlock. Another fan favorite conifer is the Western red cedar. Its rot-resistant wood is well-suited for outdoor structures and is described as the “cornerstone of Northwest coast Indian culture” because of its use in just about everything from roofs to baskets to clothing. For this reason, it has been nicknamed “tree of life” and “life giver,” and some native tribes called themselves “People of the Cedar.” Not only does it frequently accompany Douglas fir, but it also is not a true cedar. Despite this shortcoming, the Western red cedar prevails as an iconic Oregon forest tree.

To get in touch with a forest-related question or to learn more about what forest services we offer, contact Brandy at brandy.saffell@tualatinswcd.org or 971-371-0353.