Home / News / Stay Informed / Plant This, Not That: Native Alternatives to Pesky Ornamentals 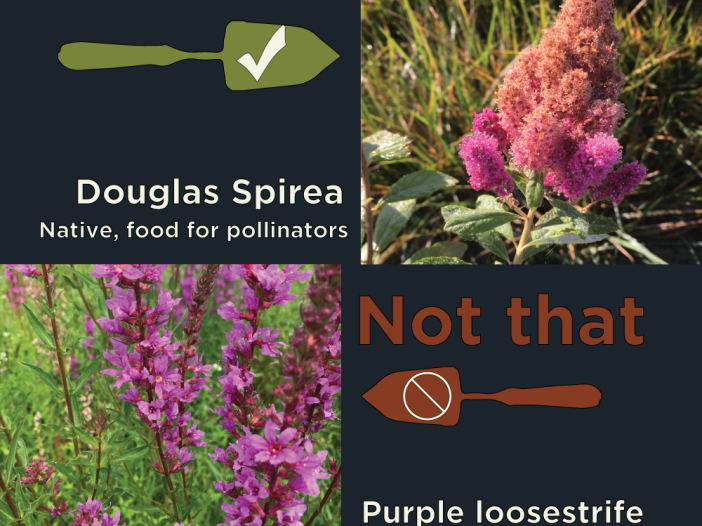 When it comes to invasive plants, there is good news and bad news. The bad news is that many invasive plants are often planted intentionally as ornamentals. These plants can escape the confines of gardens, muscle their way into local ecosystems, crowd out native plants, and destroy wildlife habitat. Despite these problems, many of these troublemakers are widely available at local and mail-order nurseries. Just because you can buy a plant, doesn’t mean you should.

Purple loosestrife’s (Lythrum salicaria) showy, upright clusters of purple flowers give it the nickname “the beautiful killer.” It is commonly planted as an ornamental species, but can quickly infest wetlands, marshes, and streams. Once mature, a single plant can produce up to 2.7 million tiny seeds annually, which spread by water, wind, wildlife, and humans. Infestations result in decreased bird habitat and can lead to erosion. Purple loosestrife is categorized as a Priority invasive species for the Tualatin SWCD.

The Pacific Northwest native Douglas spirea (Spiraea douglasii) has similar cone-shaped flower spikes, but they are usually pink rather than purple. Its flowers and dense growth also attract a variety of wildlife, including deer, butterflies, birds, and many other small animals. Douglas spirea blooms at a similar time as purple loosestrife, July through September.

You can’t blame gardeners for adoring butterfly bush (Buddleia davidii). This shrub’s purple-and-orange flowers are as dazzling to the human eye as they are to pollinators. Unfortunately, butterfly bush does not always stay where we plant it. When it escapes into natural areas, it forms dense thickets, especially along riverbanks and gravel bars, which alter soil nutrients and crowd out native trees and shrubs.

Red-flowering currant is one of the most common currant species found in gardens and landscapes. Its drooping clusters of light to deep pink flowers are one of the first things to bloom in the Pacific Northwest, corresponding with the time mason bees are hatching from their cocoons and searching for energy-packed nectar.

English ivy (Hedera helix) is a plant that many people seem to love, but it’s really a plant that people should hate! While it is useful in landscaping as an evergreen groundcover, its ability to aggressively escape gardens and dominate habitats makes it sinister in parks, natural areas, and forestlands. Once it has escaped, English ivy quickly outcompetes native plants for light, nutrients, soil, and space, creating “ivy deserts” that are defunct of wildlife habitat. Ivy is particularly harmful for trees. When left unaddressed, ivy can engulf entire trees and prevent their ability to photosynthesize.

Wild ginger (Asarum caudatum) is a fast-growing ground cover with nice, big heart-shaped leaves. The plant is deer-resistant and an important source of food for local pollinators. Wild ginger grows in shade and greens early in the spring through late fall. Plant it once and it’ll grow like crazy! If you are planting in a sunnier location, we suggest planting a variety of native strawberry (Fragaria species), which is better suited to direct light.

For many people, the glossy, dark green leaves and bright red berries of English holly (Ilex aquifolium) are synonymous with the holiday season. While popular, this plant is not native to Oregon. In fact, English holly can quickly spread when planted in our region, shading out native plants and degrading our natural habitats. Additionally, its spiny leaves and berries can be toxic to humans, dogs, and cats.

Tall Oregon grape (Mahonia aquifolium) has similar-looking leaves and can share the same stature as English holly. This leads to observers mistaking the two species. Oregon grape is a Pacific Northwest native and can be distinguished from holly by its bright yellow flowers, which attract bees, hummingbirds, and other pollinators to the garden. Holly, on the other hand, does not typically have flowers. Another way to tell these two plants apart is by looking closely at their leaves. Holly’s leaves are alternate along the stem, whereas Oregon grape’s leaves are opposite.

Share on FacebookShare on TwitterShare on PinterestShare on LinkedInShare on Email