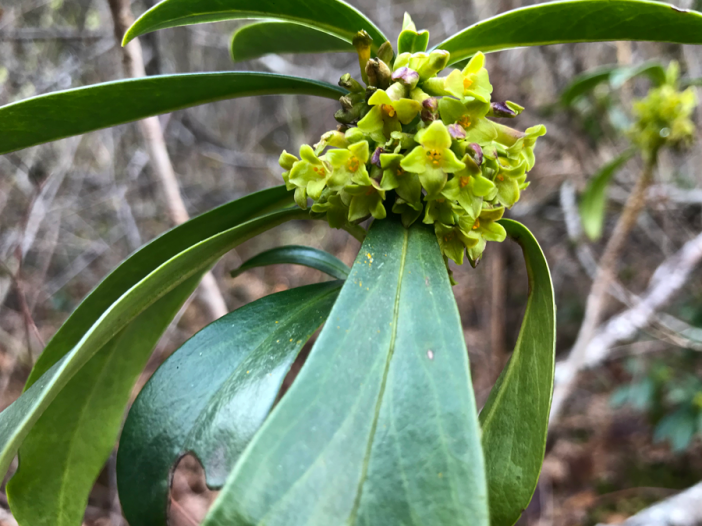 Many plants can be tricky to identify depending on what time of year you’re looking at them. Depending on whether they’re annual, biennial, perennial, deciduous, or evergreen plays a role in what each plant looks like through the course of the year. Winter can be an especially tricky time to distinguish one species from another since most of them are missing their leaves or haven’t begun resprouting.

However, spurge laurel (Daphne laureola), is an exception. Spurge laurel is a perennial, evergreen shrub that has escaped the confines of backyards and thrives in the understories of Oregon’s forests. It doesn’t lose its waxy, dark green leaves in the winter. This allows keen observers to spot among the bare stems of native woodlands plants.

Spurge laurel is neither a spurge (members of the Euphorbiaceae family) or a laurel (members of the Lauraceae family). Although it is not closely related to species from these families, it does share similar physical characteristics with other non-native species such as cherry laurel (Prunus laurocerasus) and wood spurge (Euphorbia amygdaloides).

Forest understories are important habitats that host a diversity of plant and animal life. This diversity creates competition between species in an ecosystem and is essential for food webs to remain intact. When plants are introduced to environments they are not naturally found in, they lack the competitors that help keep their populations in check. Without competition, these plants can quickly outgrow their native counterparts. In spurge laurel’s case, it grows in dense thickets, which allows it to outcompete native plants for resources. This decreases the plant diversity of Oregon’s forests.

You can reduce spurge laurel’s impact on Oregon’s forests!

Don’t fret! Although spurge laurel is widespread, there is still something we can do about it! Not only can spurge laurel’s waxy, dark green leaves be easily spotted during the winter, but some of its key features can be seen any time of year. It’s leaves grow in whorlsLeaves that radiate from a single point and wrap around the plant’s stem. and it has numerous stems that grow from a single woody rootstalk. In the late winter and early spring, you can see its small, clustered yellow flowers growing under its leaves. In the early summer, it produces dark purple-black berries that look like olives. Your keen observations can help protect our forest’s biodiversity!

If you think you’ve spotted spurge laurel you can report it to the Oregon Invasives Hotline! Make sure to take a picture and include any important location details.