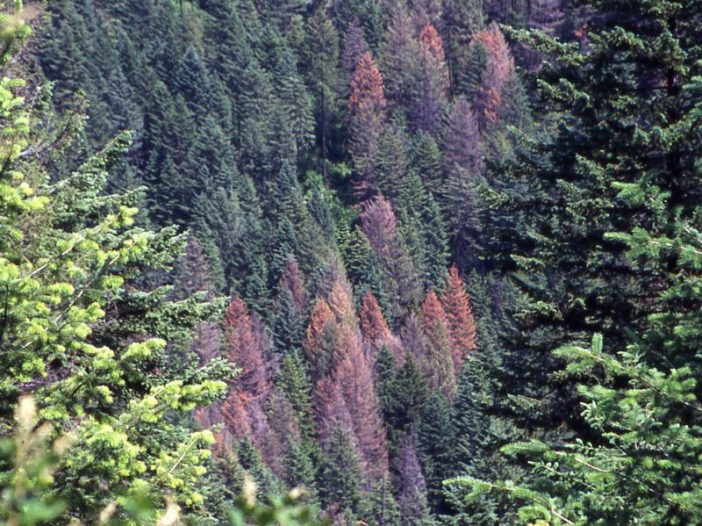 Discolored trees are a symptom of a bark beetle outbreak.

Whether you’re a woodland hobbyist who enjoys the rural lifestyle or a forest owner who makes a living producing forest products, maintaining healthy forests requires thoughtful management and attention to detail.

Forest ecosystems depend on interactions between living and non-living factors – like the Douglas fir bark beetle and dead trees. When these interactions become unbalanced, forests are at greater risk of experiencing health problems that can lead to economic and environmental losses.

Understanding the complexities of forest ecology can take a lifetime, but there are key threats to forest health that even novice foresters can learn to identify and prevent. The Douglas fir bark beetle (Dendroctonus pseudotsugae) is a common forest pest that every Washington County woodland owner should know how to manage.

Bark beetles are a part of forest ecosystems.

There are many types of bark beetles, and each one is specialized to target a particular tree species. As the name suggests, the Douglas fir bark beetle is attracted to Oregon’s state tree. Adult beetles are small, about the size of a grain of rice, and their color varies from all black to black with reddish brown. These beetles may be considered a nuisance, but they’re also a natural component of Pacific Northwest forests. Most of the time, these bugs won’t cause severe damage because healthy trees have strong defenses and other insects eat bark beetles. When destructive infestations occur, more likely than not, bark beetles are a secondary health problem due to a larger stressor.

Dead and dying trees are a buffet for bark beetles.

Douglas fir bark beetles are attracted to weak trees, downed trees, stumps, and slash because these are food and nesting resources. When there is an abundance of food and shelter, beetle populations grow abnormally large, infesting and overwhelming even healthy trees. Forests that are already experiencing stress are more susceptible to mortality from beetles. Stressors include drought, disease, wildfire, and intense storms that topple many trees at a time.

Beetle infestations are made visible from the orange-tan dust that covers bark and forms piles at the base of the tree. This dust, called frass, is a result of beetles eating into the tree’s bark. Several months after a tree is infested, its leaves may turn yellow, but some trees show no fading until a year after the outbreak. To confirm an infestation, remove a patch of bark to reveal the beetle’s distinctive tunneling pattern (5-10” vertical line with alternating clusters of horizontal lines).

Beetle outbreaks should be viewed as a symptom, not the cause, of unhealthy trees.

The best way to avoid an infestation is to promote overall forest health. Thinning tree stands by removing small, weak trees allows healthier trees to thrive and strengthen their beetle defenses. After thinning, harvesting, or storms, slash and fallen trees should be removed before April. Clearing debris before spring prevents the buildup and spread of beetles.

If you’re interested in learning more about the Douglas fir bark beetle and other types of forest pests, check out this recorded webinar from Oregon State University’s Tree School!