Moooove over conservation corps, the cows are here to help!

Cows are being put to work to help conserve native prairies! A group of ranchers, land managers, and ecologists are working together to explore a creative option for preserving native prairie habitat in the Willamette Valley: prescribed cattle grazing.

What’s so special about native prairies?

Prairies are a unique and important habitat in the Tualatin River watershed. They support a diversity of plant and animal species, many of which are state species of concern.

Periodic burning by Native Americans and grazing by elk helped prairies thrive for centuries, by preventing woody species from moving in while increasing the diversity and productivity of wildflowers and grasses. Prairie, and the related oak savanna, were once common throughout the Willamette Valley. But today, less than 1% of its original extent remains due to urban growth, conversion to farms, fire suppression, and the spread of non-native weeds.

Land managers and partner organizations are working to restore remnant patches of this habitat to ensure it remains on the landscape. This is a challenging task because prairies are disturbance dependent. This means the ecosystem thrives on occasional natural disturbance like wildfire. While controlled burning is an option in some areas, this practice is difficult to implement in populated areas like Washington County.

How can cattle help?

That’s the question Tualatin SWCD Conservation Specialist Nicole Ruggiero is trying to answer by experimenting with cattle grazing over the last several years. If cows graze the prairies at specific times of year, they may create the type of disturbance the prairies need to maintain native biodiversity and prevent infestations of invasive species. This gives land managers a safer option to controlled burning. Prescribed grazing is already being used in other habitats that were once occupied by large herds of grazers like elk. The key is to figure out the best practices for applying this technique in the Willamette Valley.

In a study at three prairie sites, Nicole and her partners observed that the grazing cattle do, in fact, create enough disturbance to diversify the native plant community, but that disturbance also creates space for non-native weeds. The creation of areas of bare ground and a decrease in thatchA matted layer of living and dead plant leaves, roots, and stems. are benefits of grazing, but land managers should still plan to manage weeds with other methods. In short, cattle grazing does fit into the “toolbox” for supporting native prairies in conjunction with burning, mowing, seeding, and weed treatments. 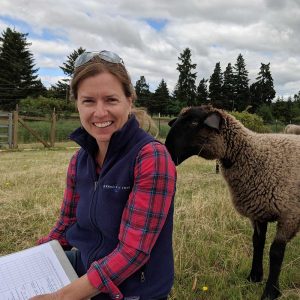 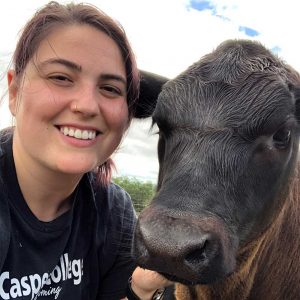